Big Y has awarded 4.9 million dollars to over 6,700 students since the beginning of the program.

Big Y® Foods, Inc. is one of the largest, locally owned supermarket chains in Southern New England. A family-owned and operated corporation, Big Y has represented excellence in the food industry since 1936.

In tribute to both its employees and its customers, Big Y offers an annual scholarship program. Established in 1981, the program includes a series of scholarships which honor Big Y's founders; the late Paul H. D'Amour and his brother, Gerald D'Amour. In addition, there is a scholarship series that was originally funded by Big Y employees to commemorate Big Y's 50th Anniversary, one recognizing the contributions of area law enforcement officers and firefighters and a category that acknowledges the tremendous sacrifice made by all Military Service members and their families.

All Big Y scholarships recognize academic merit and achievement. They are awarded to the most academically outstanding students in the Big Y market area. There are awards for both traditional and nontraditional students at the undergraduate and graduate levels.

Congratulations to all the 2020 Big Y Scholarship Recipients! 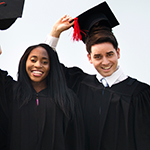 Congratulations to Our Scholarship Recipients!